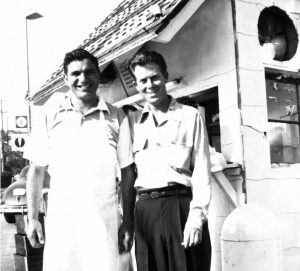 Tommy’s was founded in 1946 by Tom Koulax. The son of Greek immigrants, Tom engaged in various business ventures before founding the original stand at Beverly and Rampart Blvds. in Los Angeles. It took some time before the public discovered his small stand. However, the many long hours of work, and dedication toward quality and fast service finally paid off. By the mid 1950’s, the little stand gained a reputation like none other for the appetites of Los Angeles burger lovers.

In the 1960’s Tom had to expand his operation to accommodate the growth of his customer base. Soon he had acquired the entire northeast corner, along with the second serving station. By this time, it was apparent the public was hooked.

In the 1970’s, Tommy began breaking new ground – the opening of new restaurant locations. During the decade, five new Tommy’s restaurants were opened. Though not as popular as the original, each became very successful in its own right.

MANY IMITATE, NONE COMPARE

One particular problem for Tommy’s over the years has been protecting the name. Many profit-hungry imitators have copied key elements of the operation – such as the sign and menu – in attempts to cash in on the fame of the Original. This has resulted in some customer confusion and has been the subject of many legal battles. Today, customers are instructed to “look for the shack” on the Tommy’s logo. 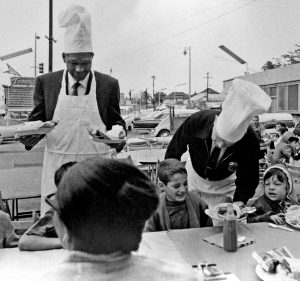 Tommy’s is oriented toward a wide customer base. Young, old, families, and every ethnic background imaginable have embraced the taste of Tommy’s. The restaurants feature a limited menu consisting of high-quality, low-priced foods. The entrees served include hamburgers, hot dogs, tamales, French fries, chili fries and a breakfast menu including an egg/sausage sandwich and a breakfast burrito.

The ingredients are of the highest quality, including 100% beef patties and hot dogs, double-thick slices of cheese, fresh chopped onions, hand-sliced beefsteak tomatoes, pickles, and mustard. All items are prepared to order, and extra portions of chili, mustard, onion, or tomato are offered at no extra charge; portions are extremely generous. As food costs are much higher than industry standards, the restaurants are profitable due only to a high volume of customer traffic.

The limited menu allows the speed of the service to be unsurpassed in the industry. Customers have to expect long lines, at Tommy’s, but certainly are delighted with the speed at which they move. This speedy service also creates an ideal situation for a drive-thru. 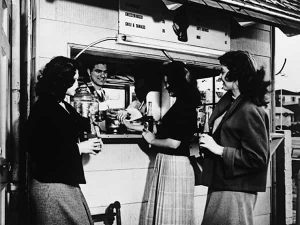 The restaurant format is self-service with no waiters utilized. Customers place their orders at a servicing counter, simultaneously paying for their order while receiving their food and beverages. Many Tommy’s are open 24 hours per day.

The restaurants all share common elements associated with the Tommy’s theme, such as paper towels, in place of napkins, basic employee uniforms (white shirt, aprons, baseball caps) and “watch while you wait” service. In addition, the Original location in Los Angeles features stand-up counters alongside the building; there are no tables or chairs to be found on premises – customers eat at the counters, which serves as part of the festive atmosphere and preserves a tradition.

Tommy’s has become known to many Southern Californians as the “Word of Mouth” hamburger. Amazingly, the saying that “the word of mouth travels fast” has proven true for Tommy’s.

Tommy’s has also been the beneficiary of much free advertising. Print-media stories on Tommy’s have been seen in Los Angeles Times, among other publications. Many televisions shows and motion pictures have included Tommy’s in scenes as well.

Tommy’s can lay claim to the slogan “World Famous” due to the inordinate attention given by the foreign press. The Swedish magazine Chic mentioned Tommy’s as L.A.’s quintessential fast food. Australian, Korean, Japanese, and Taiwanese television have produced segments as well. In addition, tourist groups from all over the world frequently include the Original Tommy’s as one of their regular stops.

Students from the University of Southern California, as well as many who regularly visit Dodger Stadium and the Staples Center venues are known to be loyal Tommy’s fans.

Tommy’s future will undoubtedly revolve around the original philosophy: Maintain quality at all costs. Since this quality control may not be possible with franchising, it is unlikely Tommy’s will sell licenses. A controlled expansion through a well-paced program of selected locations in California, Nevada and Arizona is likely.

Many fans have expressed a desire in having Tommy’s in their area. Hopefully, such desires can be fulfilled in the future – but never by sacrificing the high standards of quality, value, and service characteristic of the Original Tommy’s World Famous Hamburgers.